I have spent the past four months working long days — very long days and nearly every weekend — to put together Bungalo’s first iBook. I think most people would agree that it’s been worth the effort. It’s a beautiful book and tells a great story in a new and unusual way.

I think that Apple’s iBook platform is the answer to the faltering business of creating economical and effective illustrated books. I’ve taken to calling them “coffee tablet books” in tribute to the big, lush coffee table books I used to produce back in the 1980s.

But one can’t expect to emerge from a crazy work schedule unscathed — especially if one lives beside a quiet lake surrounded by thousands of acres of protected wilderness. The beavers it seems have been as busy as me. 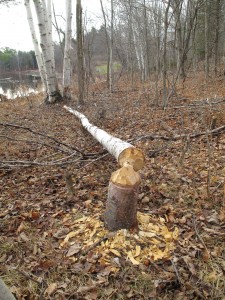 In early September — about the time I was doing the final edit of Pat Morrow’s 1982 ascent photos with him — I noticed the beavers had taken out a few trees on the south end of my shoreline. I wasn’t too worried as I had been thinking it would be nice to thin that section out a bit, something conservation rules don’t allow around here.

But when I finally wrapped the Everest project up last week and took a walk around my property, I realized that I had been too optimistic. The beaver, or beavers, had taken out dozens of trees — including some really good ones. So I’ve spent the past few days wrapping my remaining trees with chicken wire in the hope the hungry varmints will head across the lake into the 15,000 acres of Frontenac Provincial Park rather than the shorelines of my neighbours. 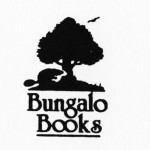 Optimistically, I choose to think that this beaver attack — the first in the 23 years that I’ve owned the property — is a good luck sign. Bungalo Books’ logo, designed in 1986, shows the silhouette of a beaver gnawing away at a tree. (It’s based on the storyline of John Bianchi’s first  crazy book about tree-loving ranchers who feuded with tree-eating beavers.)

What else could it mean?