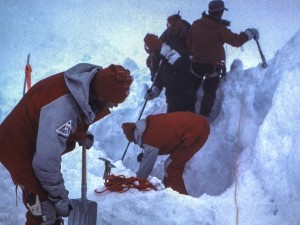 I decided to press on but only got 30 paces before being enveloped in a tremendous hissing of wind and snow. The snow was being driven so hard that it felt like grains of sand, and the rush of wind tore the breath out of me. It was very confusing, and I became totally disoriented. I couldn’t see, I couldn’t hear and I couldn’t breathe.

I tried to shield my head with my arms and dived for the shelter of a serac I knew was in front of me, but I kept being dragged out from behind it. I was clipped into the fixed rope, and every time I got behind the serac, the rope, which was being torn off the mountain, would drag me back out. “Well,” I thought, “this is it. Fate has finally caught up with me.”

As suddenly as it hit, the avalanche passed, and I could see and breathe again.

I radioed back to Camp One to say that we had been hit by an avalanche but that everyone seemed all right. Next, I radioed down to Base Camp, and after a quick conference, decided that it would be best to evacuate the mountain immediately.

As we picked our way back across the 600-foot-wide (182 m) swath of debris, we found ourselves crawling over cakes of ice the size of refrigerators. The avalanche had been massive; it had picked up entire seracs and beaten them into smaller pieces as it roared down the mountain. We later estimated that it had begun almost 3,000 feet (914 m) above. The snow that had swept over our team was one small tongue of a much larger slide.

On the far side of the avalanche path, the radio crackled again with the message from Base Camp that Rusty, Peter and six Sherpas had also been hit. Rusty had been knocked down the mountain and buried up to his chest, while Peter, spinning on the fixed rope, had been completely buried except for one foot. Rusty and one of the Sherpas were able to dig him out.

Three other Sherpas were missing. Disregarding the threat of another avalanche, Blair and I began a frantic search, but the wet snow had settled like cement. It was impossible to probe the debris, and shovels bounced off the surface. Although we were soon joined by others from Camp One and later from Base Camp, it was well over an hour before we found the only body the slide was to yield — Pasang Sona.

Two days later, Vancouver videographer Blair Griffiths was crushed to death by a collapsing serac. The deaths brought out personal conflicts that had been simmering for months. Within a week, half the climbers quit and those who remained had to switch from their original plan of a highly technical climb to the more straightforward route established by Edmund Hillary and Tenzig Norgay in 1953.