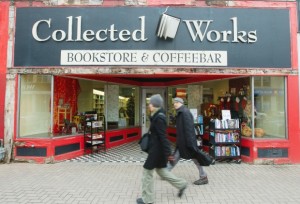 I woke up this morning to hear CBC Ottawa Morning’s host mention that independent bookstore Collected Works was on the brink of closing. An ill-timed expansion of the store in 2010 seems to have undermined the economics of the small independent bookstore. It has until  Christmas Eve to find a financial backer. The Ottawa Citizen has the details.

Having watched my favourite Ottawa bookstores close in the past year or so (the long-lived Shirley Leishman’s Books and Books on Beechwood as well as Nicholas Hoare and Mother Tongue), I find it sad to think that readers in Canada’s capital city may one day be served only by a handful of Chapters superstores and a collection of used bookstores.

I entered the book publishing world with my first book in 1984 (a lateral move from magazine publishing) and remember the next 15 years fondly. The world of books was collegial and smart and fun. Each year, hundreds (could it have been thousands?) of booksellers and publishers would meet at the annual CBA convention to explore the year’s new titles. The assembly hall was alive with ideas and excitement as book people from all across Canada came together. The aisles were packed with celebrity authors — and celebrity booksellers. Each year, I would sit at a booth autographing free books and chatting with the men and women who made their living hand selling the nation’s best books to their customers. Everyone who attended saw themselves as vital parts of an important business but booksellers were the star attraction.

Most of those booksellers and many of the publishers and editors are now gone — retired, bankrupted or just slunk away. The renamed Book Expo convention was abandoned a few years ago because there were so few booksellers outside of the Indigo/Chapters chain to attend. Now the shrinking publishing community gathers at awards ceremonies instead. It seems that awards are growing as publishing shrinks. It seems easier to honour books than sell them.

With stores like Collected Works gone, where will readers gather to talk about books? Everyone from readers and authors to booksellers and publishers have reason to shed yet another tear. Online book selling and ebook publishing may have replaced the old book business but they have also taken much of the joy from it.

I hope that Collected Works survives this latest test of its owners’ resolve.