Frank B. Edwards has never been afraid to chart unknown literary waters. When he was starting his children’s book publishing business in the early ’90s, he was one of the first to use desktop publishing.

Now he’s one of the first to get into iBook publishing, which is specifically engineered for that medium…

In a narrative sense, it’s the first publication to tell the story of how the preparation, unfolding tragedies and successes of the 1982 expedition spurred the particular planning, execution and triumph of the 1986 expedition…

Not stopping at still photos, the hybrid book also incorporates video and audio footage from both the ’82 and ’86 expeditions, which literally bring the story to life — including breathless commentary by Skreslet as he films an avalanche thundering down a not-very-distant slope, adding an extra dimension of drama and depth to the story.

You can feel the cold in Skreslet’s voice…

More than just a book, Everest: High Expectations is a well-written, introspective and thoughtful story artfully told in a 3D multi-media experience…

…(Sharon’s) personal account was most gripping when she writes about the personal ordeal, how close she constantly was to death, and reinforces to me why these beautiful crazies do these crazy, dangerous things.

Former editor of the American Alpine Journal, John Harlin III, has been giving Everest rave reviews to mountaineering editors around the world.

Everest: High Expectations, by Pat Morrow and Sharon Wood, is at the vanguard of the new wave in publishing. It’s an iPad-only book about two milestone Canadian expeditions to Everest in the 1980s. One journey takes Pat Morrow to the summit after four people died early in the expedition. The other is Sharon Wood’s struggle for the top via a new route with no Sherpa support… Both of these stories are historically important and superbly written.
… this is the first mountain book to fully utilize the incredible new iBooksAuthor system from Apple, which helps authors create multi-media “coffee tablet books.” I think it’s brilliant. It brings a book to life like never before, including slideshows, video, and sound clips. And yet the design follows the aesthetic tradition of a photo-heavy book that you’d proudly display on your coffee table. So it’s a “coffee tablet” book.
I’m convinced that growth in publishing will be in tablets and I recommend this book for two reasons:
1) these are gripping good tales that are gorgeous to look at, and
2) this book is making history, as perhaps the very first climbing book designed specifically for today’s most exciting medium.
xxxxxxxxxxxxxxxxxx 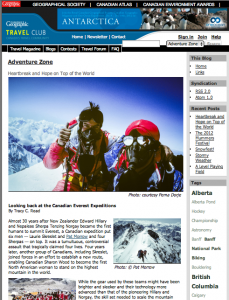 This isn’t so much a review as an enthusiastic announcement of Everest: High Expectations in Canadian Geographic‘s Travel Club newsletter — in the Adventure Zone column. Read it here.

This book is as beatiful as they come. … I almost feel like I was on those 1980s climbs.

The iBook format is ideal for these excellent accounts… This is the real stuff about climbing. The photos are terrific especially on the iPad, and more abundant than any printed book can contain; the writing clear and direct as a high-altitude wind.

You can almost fell yourself up on the mountains and in the cold with Pat. A wonderful photographer. I read the story in one sitting… An amazing story by a real mountaineer.

Breathless on Everest by Michael Buckley (author of Eccentric Explorers)

… this is more than just a book recounting groundbreaking summit bids: afterword sections take on controversies that embroil the mountaineering world… It’s a highly inspiration read.

Indelible accounts of the two expeditions that pushed Canada onto the mountaineering world stage. Bonus: a clear-eyed meditation on recent Everest shenanigans and the mutable nature of adventure by two climbing elders whose opinions matter. Timely and refreshing.

It is not often that you get a chance to joing the adventures of two of Canada’s pioneer Himalayan mountaineers… fine first person narrative… greatly enhanced by Pat Morrow’s stunning photography and the use of video clips.

A multimedia breakthrough in climbing storytelling by Saul Greenberg (mountaineer)

This book represents a breakthrough in how climbers tell stories… I’;ve read other accounts of the various Canadian Everest expeditions, but the multiple storytelling and visula perspectives offered by this book retells the story in a fresh way. This book is… a trend-setter in this new media.

A fine read by Geoff Powter (Voices of Adventure, Banff)

…excellent views of what Everest can be at its best: wild, challenging, dangerous and inspiring. A unique view of a unique time.