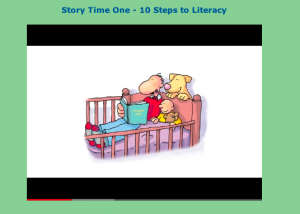 When literacy experts Deb Nesbitt-Munroe and Susan Riley approached me last summer, they were keen to promote the process of “dialogic reading” to their organization’s clientele of young parents. By the end of our first meeting, I had sold them on the idea of “Story Talk,” a much friendlier sounding label for the technique of involving kids in the art of reading. [Basically, you talk to kids while you read picture books to get them involved in story time.]

The first video (Story Talk One) is based on an illustrated magazine feature that cartoonist John Bianchi and I created for Canadian Family magazine back in 1998 for its inestimable editor Kristin Jenkins.

We stripped out the original magazine text and added an audio track of Deb and me outlining 10 ways parents can encourage children to read. 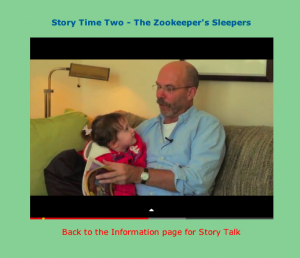 Story Talk Two is my favourite, not because it features me but because the little bumpkin on my lap is my youngest granddaughter Paige (an aptly named three year old).

In less than five minutes, we model how an adult reader can engage a non-reader in a storybook — in this video it’s The Zookeepers’ Sleepers* that John and I created back in 1997.

Paige proved to be a perfectly patient young subject — no one would guess that the video is compiled from an hour’s worth of shooting during which she listened to the story a half dozen times.

While the project (directed and edited by my son Scott Edwards, a Toronto-based actor and video editor) was created for a Kingston-based organization, the message is universal and we are hoping the videos will spread to literacy and educational groups throughout Canada and the United States.

* I would be remiss if I didn’t mention that The Zookeeper’s Sleepers is available through iTunes as a multi-touch book for the iPad.