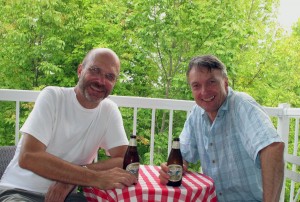 Five years later, Pat was preparing to climb Mount Everest and I was the executive editor of Equinox, Canada’s hot new magazine of discovery (headquartered with Harrowsmith magazine in the village of Camden East, near Kingston).

Officially, Pat was the expedition’s photographer and had little chance of reaching the summit. There were more than 20 climbers, the best in Canada, and no room at the top for all of them. Only the strongest two or three would summit, using the strength of the rest and a team of Sherpas to get within striking distance. 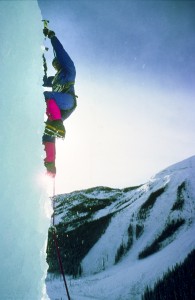 Pat’s easygoing, aw-shucks demeanor made him an interesting addition to a team that was a volatile mix of talent, ego and testosterone. He had accepted the invitation to fill the photographer slot years earlier, not really believing the expedition would get off the ground, let alone succeed at climbing the world’s highest peak. But he was a good photographer with a list of North American summits to his credit and nearly everyone appreciated his understated manner.

The team left for the Himalaya in June, planning to acclimatize to the altitude during a three-week trek from Kathmandu to Base Camp at the end of the rainy season. If all went well, the climbers would be on the upper mountain in late August. That suited the magazine quite nicely because it gave Pat a chance to photograph the people and landscape in the shadow of the mountains.

At Equinox, we knew that Canadians were interested in the expedition and hoped to capitalize on that by devoting an issue to the climb. Maclean’s magazine actually owned the exclusive first rights to the story but we knew that the minute it went on the newsstands we could roll out a bigger, better story with more photos on glossier paper. For two months, I regularly took the train from Kingston to Montreal to edit the couple of thousand photos that were couriered back to a communications agency weekly from Kathmandu. If Maclean’s knew of our intentions, no one ever called to complain.

Canadians’ interest in Everest and mountaineering was not sophisticated and few probably cared that the climbers originally intended to forge a new route to the summit. It was dubbed the “Canadian Spur,” a deviation off the traditional route that had been established 29 years earlier by New Zealand’s Edmund Hillary and Sherpa Tenzig Norgay. In 1982, simply summiting Everest was not enough — that had been done more than 100 times. Serious climbers wanted to leave their mark with new routes that required technical climbing. (Italian Reinhold Messner and Austrian Peter Habeler had raised the Everest bar even higher in 1978 when they summited without oxygen.)

But the Canadian’s dream of a place in the Everest history book was shattered after two successive accidents on the lower slopes. On August 31st, an avalanche killed three Sherpas. Two days later, Vancouver videographer Blair Griffiths died when a towering ice serac collapsed on top of him.

The deaths brought out personal conflicts that had been simmering for months. While the team leaders defended their strategies, some members accused them of endangering lives by climbing when the slopes were unstable. Within a week, half the climbers quit, leaving their teammates with 27 tons of gear but not enough manpower to tackle the Canadian Spur route.

Back home, news of the accidents and the contentious split added spice to the story, attracting the attention of news media around the world. In September, ABC’s newly minted Nightline with Ted Koppel became the first show to do a live broadcast from the Himalaya.

A week later, the remaining climbers, including 29-year-old Pat, resumed the push to the upper slopes but reluctantly opted to follow the Hillary path (derisively known as “the Yak Route”). Bad weather, oxygen deprivation and altitude sickness meant it was no cakewalk but it was a disappointing turn of events for the hardcore mountaineers.

In the end, two Canadians and four Sherpas, reached the summit. Two days after Calgarian Laurie Skreslet became the first Canadian to reach the top of the world, Pat was at Camp Four (the highest camp at 7,955 m) in a support role for teammate Alan Burgess. Feeling strong despite the altitude, he scrounged through the half empty oxygen cylinders littering the site to find enough 02 to increase his own summit options. (He also salvaged Skreslet’s abandoned oxygen regulator.)

When Burgess set off for the final 893-metre push with two Sherpas, Pat trailed behind at his own slow steady pace, eventually passing them during a rest stop. When Burgess’ regulator froze up, forcing him to turn back, the Sherpas caught up to Pat, and within hours, the trio was taking pictures of each other on the summit. Providently, Pat had decided to use Skreslet’s regulator. He became the 132nd climber to reach the Everest summit — and the second Canadian.

After the climb, Pat went on to claim the world’s Seven Summits’ title — becoming the first person to reach the top of each continent (including Australasia’s Carstenz Pyramid). At Equinox, we tracked his progress with four years of photo stories and published a bestselling book about his accomplishment in 1986. During those days, he was a regular visitor to Kingston and editorial meetings occasionally adjourned to Dollar Bill’s  in the Prince George Hotel.

More than 25 years later, Pat and I decided to retell his Everest story in a new format – as a multi-touch e-book designed exclusively for the Apple iPad. Over the course of last summer, we scanned hundreds of his Kodachrome slides, created maps and updated his story. The iPad format allowed us to incorporate three times as many pictures as a print book and also include archival video and audio clips.

During production, Pat also introduced me to Canadian climber Sharon Wood whose 1986 Everest adventure realized the dreams of the earlier expedition. Not only did she become the first North American woman to summit Everest, she and climbing partner Dwayne Congdon forged a route up the sheer North Face (on the Tibet side, without Sherpa support) that has never been repeated. In retrospect, she is amazed that they survived the ordeal. Their summit was so late in the day that they had to descend the near vertical route in darkness. After finally finding the windblown-snow-covered tent in the dark, it caught fire when a small stove exploded.

Sharon’s story folded nicely into Pat’s so we brought her into the project, creating Everest: High Expectations, a multimedia feast available through the iTunes bookstore in 51 countries.

One of the important elements of the book is their insight into the changes taking place on Everest today. Policy changes in Tibet and Nepal allow hundreds of inexperienced tourist-climbers onto the mountain at a time — often with fatal consequences. On the 60th anniversary of Hillary’s climb, there have been more than 6,100 summits by 3,755 individuals. Skill and dreams of establishing new routes have given way to $50,000+ adventure holidays and traffic jams that have hundreds of people at a time waiting in the high-altitude death zone for a chance to brag to the folks back home.

Pat and Sharon’s teammates were the last of a disappearing breed and their story makes a gripping read.

Everest: High Expectations. By Pat Morrow and Sharon Wood. Published by Bungalo Books. Available only for the iPad at Apple’s iTunes bookstore. $9.99.