Pat Morrow, friend and author of Bungalo Books’ Everest: High Expectations, contacted me early today to say that up to 13 Sherpas died yesterday while preparing this spring’s commercial route up Everest’s South Face. Early morning sun seems to have triggered an avalanche just above the Ice Fall. As he noted, this was where his team was struck during their 1982 ascent — an accident that killed three Sherpas (Ang Tsultim, 20, Dawa Dorje, 40, and Pasang Sona, 40). Team videographer Blair Griffith, 32, was killed a day later in the same area when a serac collapsed on him. 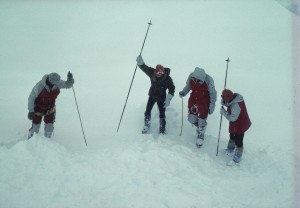 During the Canadian Expedition’s accident 32 years ago, there were about a dozen Sherpas and a half dozen Canadians carrying supplies up to Camp One. Yesterday, there were about 100 Sherpas on the route — numbers that are required to prepare adequately for the large scale assault next month by about 500 paying customers. Sadly, the high number also means high casualties when accidents happen.

My only link to Everest and mountain climbing in general is through my friendship with Pat Morrow so I do not fully understand the allure of high summits. But working on High Expectations with him two years ago, I did come to believe that Everest’s current easy access has undermined the spirit of the mountaineering he and his colleagues pursue. Money — a desperately needed commodity in Nepal’s back country — has changed the nature of the classic Himalayan adventure from accomplishment to big-ticket thrill for the participants.

This weekend’s accident could perhaps be described as a workplace accident. If it happened  in North America — at a tourist destination like Disneyland or on a commercial white water rafting route — the government would shut it down. The loss of 13 lives to give several hundred tourists their thrill of a lifetime would be too high a cost.

But that is not how Everest works.

My thoughts today are with the families of the working Sherpas who died.

Recalling a time when solitude and technical challenges drew climbers to the mountain, he is now concerned that adventure-tourists END_OF_DOCUMENT_TOKEN_TO_BE_REPLACED