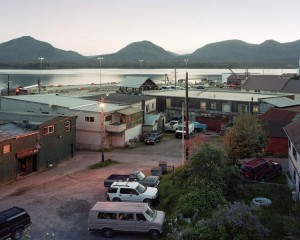 Why, I wondered, had The Walrus editors chosen to devote 10 pages to 21 depressingly muddy photos, only six of which were Canadian. “Filler” came to mind. There was no engaging essay, the reproduction was horrible and the layout simply dull — four equal-sized, squarish pix per spread. I eventually realized that the art director had simply run them as 4 x 5 contact prints right from Conarroe’s Wista RF landscape camera. Boring…

Irritation turned to amazement when I went online to check out Mr. Conarroe’s bonafides. It turns out that his photographs are quite good when presented well, as they are on his website. Well they can be a bit dreary at times but when he finds good light the photos are worth more than a glance. 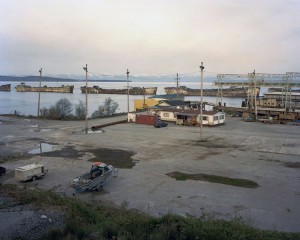 Generally I am no fan of large-format landscape photography unless it is done well and the results are presented in an even larger format. The cameras are cumbersome and produce static shots. In Conarroe’s case, he focuses a bit too often on depressing scenes, usually with oil-stained parking lots and assorted motels/hotels in the darkish foreground while the sun rises over the sea. 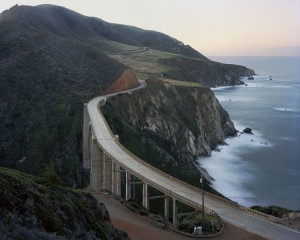 But his slow shutter photo of Bixby Creek Bridge, Big Sur CA, which fluffs the white waves bashing the cliffs and traces the winding highway through the hills, proves that it works sometimes. The pictures that feature foreground eyesores are less inspiring although they do make the point (perhaps too often) that man has ruined nature’s beauty. 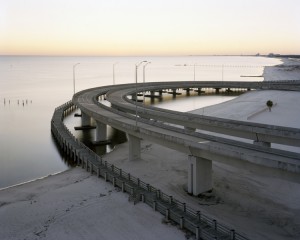 But my fascination with the photos is not to critique Conarroe but to question The Walrus‘ use of his pictures in the magazine. They were large-format photos printed small and badly on thin paper. Why bother? A couple of large shots could have given readers a taste of the real deal and directed them to his website where the images come to life thanks to big, bright computer screens and clean presentation.

Of course The Walrus could have added the shots to its own website if it had a photo gallery for such endeavours. But it seems the magazine is wed to its print presentation no matter how badly done. (Oddly it doesn’t even list the photo essay in its issue lineup.) It’s an odd strategy in a digital age when beautiful photography of all kinds is readily available across the internet.

Good landscape photos deserve big presentations, something that Conarroe knew when he mounted By the Sea exhibits in Quebec and Toronto — back in 2011. (I guess that means that I can also fault the magazine for being two years out of date.) The Walrus did a disservice to him and its readers with its presentation. It could have done better.