Heart of the Himalaya is a rich photo tribute to the people of the world’s highest mountain range by Pat and Baiba Morrow, two photojournalists who have travelled extensively through it for the past 33 years.

Heart of the Himalaya features: 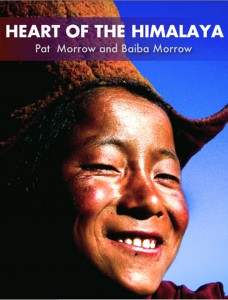 While readers will recognize some of the region’s landscapes, the focus is on the people who form the heart of this mountain world. This project was born from an acclaimed 2014 photographic exhibit of their work (also entitled Heart of the Himalaya) at Banff’s renowned Whyte Museum of the Canadian Rockies.

Perhaps this “coffee tablet” ebook’s most treasured images are from Tibet, a country under tight Chinese control that has seldom been open to foreigners since the early 1950s. The Morrows’ photos of its monks, monasteries and market places capture a world that is being destroyed by a government intent on homogenizing an ancient civilization.

Pat and Baiba have travelled to the Himalaya for many reasons.

Wherever they have taken their cameras (both video and still), the Morrows have focused on the people they meet — and have been particularly drawn to displaced Tibetans who have fled their homeland for safer lands.

Heart of the Himalaya is a tribute to the people who are indeed the heart and soul of one of the world’s most challenging and magnificent environments.